Heroin and opioid drugs like morphine and Vicodin cause the pupil of the eyes to constrict. One of the signs of substance abuse with this category of  drugs is small pinpoint pupils. The lack of dilation is a possible warning of a serious addiction problem. According to a study in the  British Journal of Ophthalmology (1995) there is habituation of the pupils to the drugs. The pupil does adapt and dilation occurs more readily over time. 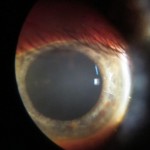 Why Don’t Pupils Dilate After Time?

If drug tolerance builds up over time the eyes should return to a more dilated state. Since that does not seem to be the case what is going on? The answer is simple-increasing amounts of narcotics are used to achieve the same level of euphoria by most addicts. This keep the pupils in a constricted state even though they are habituated to the prior dosage levels.

Can Your Eye Doctor Tell If You Have Been Abusing Drugs?

The short answer is probably not.  Pupil size varies greatly between individuals and with age becomes smaller. Extremely small pupils in a young person with other signs of altered mental status can be a strong indicator. Naloxone is a drug used to treat overdoses. If applied in a drop to the eye it produces dilation in people with drug addiction. It is not something an optometrist would use in a routine eye exam. Normal eye drops to dilate the pupils won’t work as well in cases of dependency. If you are concerned about a child or friend having a potential drug problem observing their pupil size is not a bad idea. Tiny pupils are hard to miss in a teen. If they are present after the age of 40+ it is not as significant since the pupils does get smaller as we age. One other thing to look for is a sluggish pupil response where the eyes take longer than normal to dilate after the lighting lessens, or after a teens eyes shift in focus from near to distance.

When you notice these changes accompanying behavior alterations take some action before its too late. Then there is the eye rolling phenomenon. All I can say is good luck with that one!