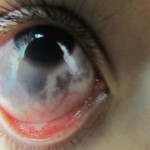 Ocular Melanosis-Dark Spots on The

White of The Eyes

Dark spots that appear over the white areas of the eyes can be usually benign growths of the pigment producing cells known as melanocytes. There are three different type of benign growths:

Ocular Melanosis (Technically Congenital Ocular Melanocytosis) presents a picture similar to what is seen in the left image. There are rather dramatic large areas of gray and almost blue discoloration seen on both eyes.

The classification of pigmented spots over the white part of the eyes is somewhat confusing. The sclera is traditionally thought of as the white of the eye. Is is covered by a thin layer known as the episclera. On top of this is the outermost layer, a transparent covering  known as the conjunctiva (which becomes inflamed during attacks of conjunctivitis or pinkeye). Pigmented spots can occur in one or all of these different layers.

Melanocytes are the cells that contain melanin, the pigment that darkens the area. There can be an increase in the number of melanocytes or in the  amount of melanin. The pigmentation changes seen in this eye were present at birth and involve increase numbers of melanocytes in the episclera and possibly the sclera. While there is some disagreement most researchers believe there is a rare increase for the risk for a melanoma developing on the eye. About 10% of people with ocular melanocytosis will also develop a secondary case of glaucoma. If a patch of pigment manifest on the skin surrounding the eyes. it is called Nevus of Ota.  When a  Routine annual eye examinations are generally the recommended care if no changes are seen.

This may also be referred to as congenital ocular melanocytosis, blue nevus of the sclera, birth marks on the eye, and freckles on the eye. It is not the same as a dis-colorization that develops after birth. This is usually noted as Primary Acquired Melanosis and is localized in the conjunctival tissue layers.