The genetics of eye color is fairly complex and eye color is difficult to predict from parents eyes appearance. The OCA2 gene determines over 80% of the eye color but several other genes are involved. Melanocytes are the pigment containing cells in the iris (the colored tissue surrounding the pupil. There is a surface layer of epithelium cells with melanocytes, and melanocytes that occur in the deeper stromal layer underneath the epithelium. Melanocytes contain a type of pigment referred to as melanin. Melanin may be present in varying degrees in the melanocyte cells. Most of the eye color is determined by the amount of melanin in the stromal melanocytes. When there is little pigment, the collagen structural fibers in the iris stromal layer scatter light and the individual has the appearance of blue eyes (Melanin is a dark brown pigment and there is not a blue pigment). Children who are light skinned are normally born with a very low melanin content in their cells and have blue eyes at birth. The amount of melanin usually increases until around the age of three and a child’s iris color then will probably remain somewhat similar throughout their life, although some studies show lightening or darkening of eye color occurs in about 40% of children up to age six.  Between 10-15 percent of adolescents will continue to experience eye color changes well past the age of three. Even adults can continue to have changes in eye color over the years. In the past, it was believed that adult eye color changes were always the result of eye disease processes.

Blue Eyes In Adults Are Probably Due To A Mutation

A mutation in a gene (HERC2) is thought to inhibit the production of melanin in adults with blue eyes.Blue eye color has been increasingly more uncommon, currently about 15 percent of children in the US today (excluding newborns). At the turn of the century it was close to 60%. It is thought that the decrease is due to the greatly increased number of individuals marrying outside their ethnic group as we have become a mobile society.

Just like everything else with children, expect to be surprised in the future with how they look and what they do. Even teenagers have been known to miraculously have hair that turns blue overnight (especially after spending the night at a friends house!). Look for more additions here about eye color in the near future. 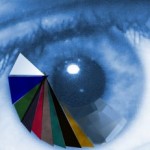