Having A Bad Reaction To Eye Dilation Drops ?

Patients frequently ask me how long their pupils will remain dilated after the eye exam. How long do eye dilation drops last? Eye Doctors use different drops,different strengths, and different dosages when dilating your pupils. If you are having light flashes or symptoms that could indicated retina problems two different drops may be used in higher concentration and several doses. A routine exam may only require less dilation and milder drops.

Eye color effects the duration of dilation. Since brown pigment in the iris is essentially the only eye pigment, blue eyes lack significant color and gain their blue shade from light reflecting in the iris. Pigment binds the dilating drops and require higher doses but blue eyes react faster and more to dilation drops.

Different drops are often used for children’s eye exams and occasionally for adults that have inflammation in the eye from contact lens injuries, eye trauma, or autoimmune diseases and they may keep eye dilated for several days. When atropine eye drops or ointment is used, occasionally patients will experience dilated eyes for up to three weeks after the visit to the optometrists office. That’s a long time to not be able to see things close and suffer from light sensitivity!  Fortunately these stronger drops are typically reserved for use in very young children and toddlers. Well, it may be unfortunate from their perspective, but they usually don’t complain about it as vocally as teens and grownups do, so it is a little easier for everyone else around them.

Severe reactions to atropine are relatively rare, but if your child (young or old child) has had atropine drops, it is helpful to remember the old mnemonic: Blind as a bat, dry as a bone , red as a beet, hot as a hare, mad as a hatter. This can help guide you in seeking further care. In an extreme reaction there are normal changes-the eyes are dilated and very blurry for anything seem up close. Then there are the abnormal changes- the skin becomes very dry without sweating and there is  flushing and redness of the skin seen over the face, neck, upper chest and back. Finally, there is the mad hatter part. People can become very agitated and even hallucinate. When I was finishing school, I saw a woman who had been dilated with atropine  in the past and had experienced 24 hours of seeing snakes on the walls and feeling insects crawling across her skin. Needless to say, we both thought it would be a very bad idea to repeat that experience. There are other eye drops that are much safer to use in most cases.

Finally, there are individuals with idiosyncratic reactions to the prescription eye-drops used to dilate your eyes. Basically, that means the optometrist is an idiot and has no idea why one out of thousands of eyes are extremely sensitive to dilation drops and react in unusual ways (like staying dilated for 24 hours or more). In some people, there may be a hypersensitivity to the drops  when they bind to the muscles that dilate the eyes. These patients might dilate to 1/10 of an eyedrop! The drops may also release much slower than normal when they are bound to the muscle resulting in a prolonged period of dilation.  (The meaning of idiosyncratic is a well kept secret by all types of Doctors so please don’t reveal me as the source of explanation). If you have this type of reaction you can try and request a little known secret we use-simply diluting the drop!

The final answer is your eyes will usually stay dilated for several hours but it could be up to several days. Good luck and remember, after the first time, you will probably have a fairly good idea of what to expect in the future. You can always request weaker drops be used. Sometimes eye doctors will use repeated dosing of multiple drops to speed things up. That can be pretty convenient for us (optometrists) and you (patients) since it gets out without having to sit for extended amounts of time waiting for the eye drops to kick in. Sometimes sitting around for 30-60 minutes using one dose is much preferred to waiting two weeks for the dilation effect to wear off. Once you determine you are one of the lucky few that stays dilated for weeks, speak up and request a little TLC! 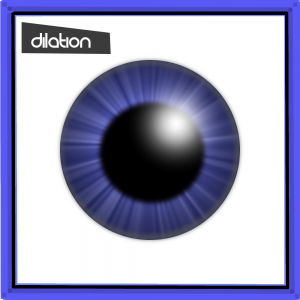 How Long Does Pupil Dilation Last?